April is Bowel Cancer Awareness Month, dedicated to raising awareness of bowel cancers or cancer which start  in the large bowel.

We spoke with Andrew Delf, a service user at our Big C Centre at the Norfolk and Norwich University Hospital (NNUH), to hear about his experience with bowel cancer.

This is his story… 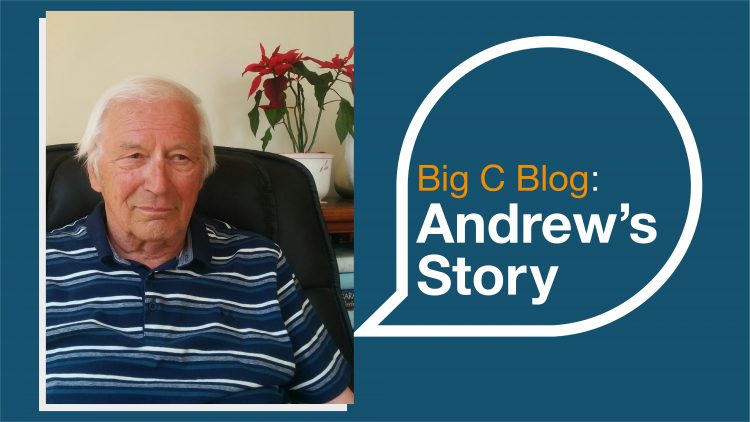 I know this must have been a very difficult time for Anne and I really appreciate all the support and comfort the Big C gave to her during this period.

In 2018, Andrew Delf noticed a change in his habits. He began to experience bloating, excessive flatulence and loose bowel movements, such as diarrhoea.

At the beginning, he believed these body changes were a result of the medication he was on due to an ongoing lung condition.

However, one Friday Andrew began to feel unwell and he developed a severe pain in his stomach followed by diarrhoea. The following Monday, Andrew visited his GP to discuss these new symptoms.

He said: “I actually met with a nurse practitioner during my appointment. She listened to what my symptoms were and immediately asked a doctor to come in to the room. He explained that I needed to go to the hospital right away.

“I said, ‘No, I can’t do that today because I’m busy. I’ll go the day after tomorrow.’ The nurse paramedic said, ‘No, you’re going today.’ And that was the start of it.”

After arriving at the Norfolk & Norwich University Hospital (NNUH), Andrew was sent to the medical emergency unit (AMU) where he was seen by a doctor who examined and referred him for CT Scan. A surgeon then met with Andrew and told him he had developed colonic diverticulitis, an intestinal disease where pouches form along your digestive tract usually in your colon.

Andrew stated that he was a bit relieved when he received this news because he thought ‘at least it’s not cancer.’ Both Andrew’s father and grandfather had passed away from cancer and Andrew was afraid that the type of cancer they had was hereditary.

After receiving his diagnosis, Andrew had a colonoscopy, a test which checks the inside of the bowels with a camera, so that doctors could examine his diverticulitis.

During the colonoscopy, the doctors discovered a tumour and informed Andrew he would need to have surgery to remove the tumour and diverticulitis.

Andrew said: “The doctor told me it would be a major operation, but I was given the choice to have the operation or instead be given chemotherapy treatment.

“The surgeon explained how the surgery would go and said I could have time to think about it. I told him ‘I don’t need to think about. It’s not going to make a difference, I want to get rid of the tumour.’”

In August of 2018, Andrew underwent surgery to remove the tumour and diverticulitis.  The surgery was successful, but due to complications post-surgery Andrew spent a month in the hospital.

During this time, Andrew was fitted with a stoma bag, a small bag attached to the body which diverts and collects waste (such as urine or faeces) outside of the body.

Andrew said: “I found the support I received regarding my stoma bag to be wonderful. My father had a stoma bag, and my mother and him found it a very difficult and daunting task to deal with by themselves.

“Fortunately, I had a stoma nurse who helped me during my stay at the hospital and one who frequently came to visit me in my home to help me with this. I found this very comforting to know that my wife and I had someone to guide us throughout the whole thing.”

Around Easter of 2019, Andrew had surgery so that he no longer needed a stoma bag.

He experienced complications during his surgery and had to spend another month in the hospital to be monitored.

During this time, Andrew’s wife Anne frequently visited the Big C Centre at the NNUH in between visiting Andrew.

He said: “I know this must have been a very difficult time for Anne and I really appreciate all the support and comfort the Big C gave to her during this period. She had to travel to and from the hospital frequently to visit me. It’s comforting to know that before coming to see me, she could step inside to the Big C for a coffee and a biscuit and speak to someone about how she was feeling.”

Since his second surgery, Andrew has not had any further cancer treatments, and he continues to have routine CT scans done at the NNUH.

Andrew and Anne both still visit the Big C Centre and both have used some of the other services such as the Relaxation sessions and complimentary therapies.

One of his favourite memories from the group is the two boat trips that was arranged for the group through the Nancy Oldfield Trust; one where they were able to travel from Ludham Bridge, down the Ant and then up the Bure towards Wroxham, and another one which occurred a few months later where the Mens Group attendees brought along their loved ones and carers to travel up the Thurne to Potter Hiegham.

Regarding advice Andrew would give to others, he said: “I would stay well away from Google. If you have any questions about your health, speak to your GP or use a reputable source such as the NHS website.

“You can also go to the Big C Centre at the NNUH and look at their Information Library which is full of useful pamphlets and leaflets. There is also qualified Cancer Specialist Nurses at the Big C who can talk to you about your diagnosis and explain it to you.”

In his free time, Andrew enjoys spending time with his family. He also regularly attends a Lung Group at a local gymnasium where he keeps a strict exercise routine. He also enjoys fishing, sailing, and generally being by the river or any body of water.