October is Breast Cancer Awareness Month which aims at increasing awareness of breast cancer support, research and diagnosis. It is also an opportunity for people who have been affected by this form of cancer to share their stories.

Lesley Knox, a volunteer in our Norwich Big C Centre at the Norfolk and Norwich University Hospital (NNUH), spoke to us about her experience with breast cancer, life after treatment and why she now volunteers to help others affected by cancer. 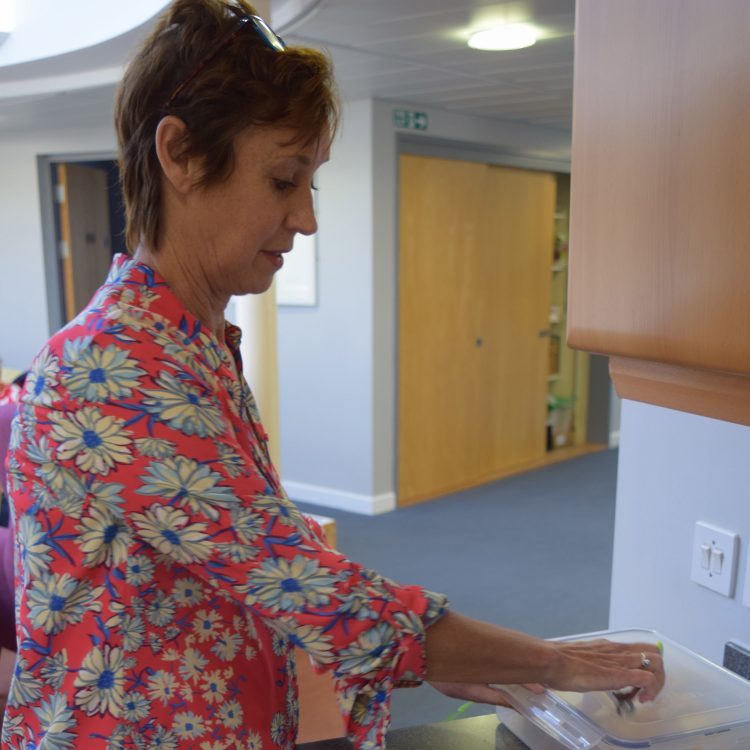 With cancer, you’re going to go through very difficult times, but those times will inevitably pass. It’ll be like a dark cloud hanging over you, but that cloud slowly does brighten and lift.

In April 2016, Lesley Knox and her family returned to South Africa to celebrating her son’s wedding with close friends and family. During her trip, one of Lesley’s closest friends informed her that she had been recently diagnosed with breast cancer. When speaking to her about it, her friend urged Lesley to request a mammogram as her friend’s mammogram was how she had discovered her cancer diagnosis.

Upon returning to the UK, Lesley spoke with her doctor during her general check-up about booking another mammogram, even though she had just had one a year before. A few days before her appointment, Lesley was lying on her side in bed when she noticed a lump underneath one of her nipples. Her husband told her not to worry about it as she was going to have her mammogram in two days.

She said: “I remember at the appointment, they were zooming in on this spot on my breast and I said, ‘Is that a cyst?’ as I was prone to getting them. The doctor said, ‘No, unfortunately that’s something to be really concerned about. That’s breast cancer.”

From there, Lesley had a biopsy and several other tests to determine the type of breast cancer she had and to see if she had developed a secondary cancer.

She said: “I didn’t realise there were so many different types of breast cancer. It was a real shock to the system with it just coming out of the blue like that, particularly as it was a very aggressive type. Fortunately, it was caught early, which can be vitally important for the success of treatment.”

Lesley said she had amazing support network during her treatment.

She stated that the staff at the NNUH were dedicated and friendly, from the surgeon right through to the assistant nurses.

Apart from this, both her sister and husband supported her by going went with her to all her oncology appointments and cancer treatments.

Lesley’s sister, who still lived in South Africa at the time, also came to the UK as soon as she heard the news.

Lesley said: “When I started my treatment, she stayed by my side and recorded everything that was happening in a diary – how I was feeling, when I went to the toilet, even when I coughed – it was all written down in the book.”

She added: “My husband was also amazing because it felt like he took 50% of my cancer away from me. For him, he said it felt like he also had the cancer. He was so encouraging, and he gave me so much support.

Lesley also remarked that the hardest part of her journey was telling her children. She said: “That was the only time I actually cried. I knew I had to tell them and that inside their hearts would be breaking. However, I knew they wouldn’t want to show me, and they thought they had to be strong for me.”

One thing Lesley made sure to do every day was to walk or jog.

Lesley said: “I’m a firm believer in exercising. For me, it was a key to my healing – for the mind, body and soul. I just made sure to do that every day no matter what, and I think the that really helped me mentally.”

She added: “I also had complete faith in the medical team, and just took one day at a time throughout my treatment.”

As soon as Lesley found out about her diagnosis and the treatment plan, her husband and her went to the Big C Centre at the NNUH.

Lesley said: “My husband is a firm believer in just facing everything head on, so he took me straight to the Centre.

“It’s very relaxed – you wouldn’t believe that a lot of the people in there have or had cancer – they’re all very upbeat.”

Lesley used the Centre during her treatment and benefited from the complimentary therapies and speaking to the Support and Information officers.

She said: “It was like my ‘safe place’ – a home, when I was going through treatment.”

Life after her cancer treatment was not the easiest for Lesley.

Lesley said: “I felt very insecure afterwards because I was just basically waiting for it to come back. At the beginning, every time I would have a little pain or pain anywhere, I would call my doctor right away because I had the fear that the cancer had spread.”

She added: “My doctor was great though as he was calm and reassuring. I’ve also come to realise you’ve just got to stay positive and keep going. If it does come back, you can’t stop it and you’ll have to deal with it. So, there is no point in worrying over it.”

One way Lesley has healed after treatment is by volunteering for Big C after her husband suggested it.

She said: “He said to me, ‘You really should go and give something back because they were so supportive of you and us.’  I was worried because I didn’t think I would be very good at it.

“However, I think when you are a patient facing cancer, you they need to know there are other people going through it, or who have gone through the same thing as you. Because of my experience, I quickly found myself fitting in and now I really look forward to when I volunteer on Thursday afternoons.”

Lesley added: “I’m a firm believer that something good comes out of everything bad.

“With cancer, you’re going to go through very difficult times, but those times will inevitably pass. It’ll be like a dark cloud hanging over you, but that cloud slowly does brighten and lift.”

When Lesley is not volunteering, she continues to stay fit and jogs with her daughter and husband in the Norfolk’s beautiful country fields.

She also keeps busy by supporting her husband with his business, looking after her mother, and consciously spending more quality time with her family.

Lesley said: “As much as the whole experience was terrifying and hard, it really did put into perspective the important things in my life – my beautiful family, my health, my marriage. It is so easy to take those for granted.”