On Sunday 23rd May, the Premier League football season came to an end and with it the conclusion of our Big C Fantasy Football League. Unlike the actual Premier League, our Big C league went right down to the wire with the top three players all still in the running for the title on the final day of the season.

The Athletic journalist and Melodica playing extraordinaire, Michael Bailey took an early season lead claiming the Manager of the Month award for September but he couldn’t maintain his form and finished 15th in the overall table.

Richard Hoey took over at the top of the table in the autumn, claiming back-to-back MOTM awards for October and November but Rich also lost form after Christmas sliding down to 8th in the overall table.

Ian Mitton picked up a MOTM award after an impressive score in March but it wasn’t enough for him; he finished 7th overall at the end of the season.

Some very late form from Dominic Miller gave him an outside chance of the title on the final day but it wasn’t enough and he finished 3rd overall. Tristan Sanders picked up multiple MOTM awards throughout the season and went into the final game just a few points behind the top spot but he couldn’t do enough to overcome the points gap and finished a very respectable second place in the final league table.

Which means the 2020/21 winner of the Big C Fantasy Football League is Dan Bell! Dan’s consistent form from January onwards led him to the title picking up multiple MOTM awards along the way.

Many congratulations to Dan and a huge thank you to everyone who took part. 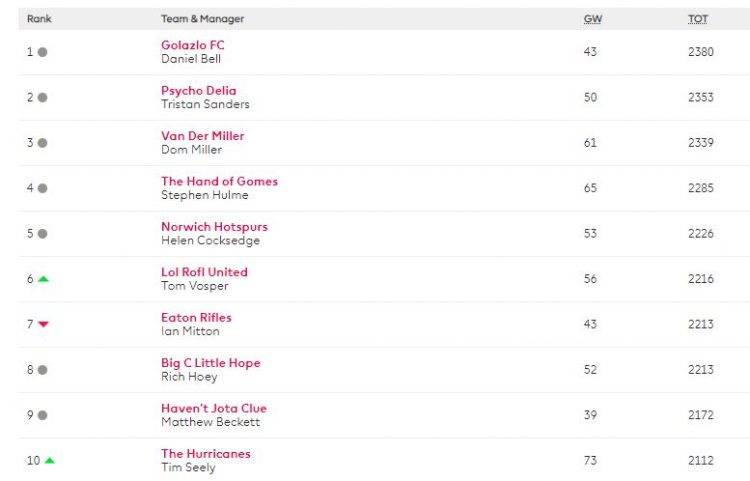 If you would like to take part in the Big C Fantasy Football League for the 2021/22 season, you can find out more and sign up here