An insight into a group meeting of men diagnosed with prostate cancer who gather monthly to support one another and raise awareness of the condition. 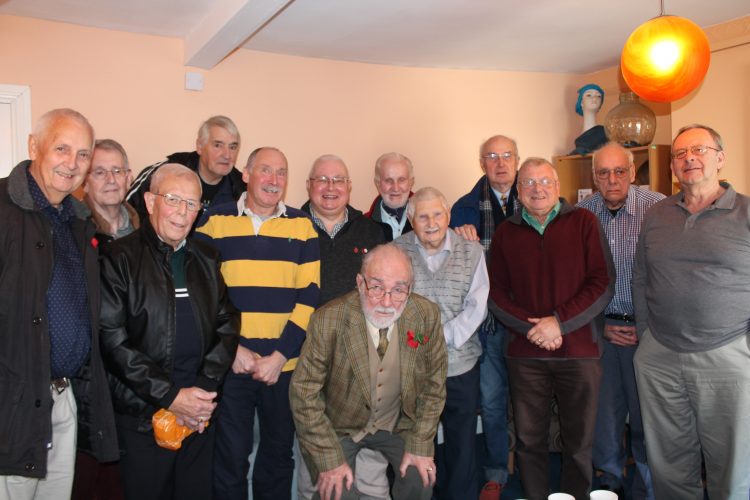 See, this is what the group is for, talking about things like this and getting advice.

An insight into a group meeting of men diagnosed with prostate cancer who gather monthly to support one another and raise awareness of the condition.

Every first Wednesday of the month, a group of men descend upon Big C’s Support and Information Centre in King’s Lynn.

For half an hour, the men catchup with one another and Big C staff over cups of coffee and tea, chatting about a variety of topics from how cold the weather has gotten to how they got to the Centre that day.

However, once it hits 10:30 all the Kingsman Group gather in the upstairs meeting room. They never know how many chairs to put out for everyone – sometimes the group has as little as nine men in attendance, other days there can be up to sixteen or more.

The Kingsman Group is a group for any man who has been diagnosed with prostate cancer.

First formed in 2015, the group meets monthly at the Big C Centre to provide support to anyone affected by the condition.

Alan Pierce, one of the founders of the group, said: “When you are first diagnosed with prostate cancer, it can be quite a blow. We have certainly found strength in numbers in terms of sharing news, worries, information and knowledge.”

There are currently over fifty men who have been supported by the group, and each week there is always a mixture between regulars, people who occasionally attend the meetings and newcomers.

There is no agenda or meeting minutes – these informal discussions are purely led by the attendees themselves. The men are from all different backgrounds and age groups but speak like they’ve been friends for year.

Not only do the men meet regularly for meetings, but also plan socials and other activities.

During the November meeting, the group begins the meeting by discussing their next social which is a Christmas meal and all settle on a restaurant and time and how they’ll get this out to other members in the group not in attendance.

This is followed by good news that the group has received a donation of £500 which they hope put towards buying more Kingsman’s Kits for other men newly diagnosed with prostate cancer.

Started in 2018 by the group, the Kingsman Kit includes items such as a Radar Key to allow access to disabled toilets, a toilet card to permit use of toilets in shops and cafes, a Thera Exercise Band, a small amount of literature and a tote bag with the Kingsman logo on it.

Following a discussion, a man arrives late to the meeting and all the men joke about his rare sighting. He discusses how we won’t be able to attend the next meeting, to no surprise, as he is travelling.

This leads to a side discussion about paying for travel insurance when you’re diagnosed with cancer or have other health conditions.

He said: “Well, we all are! But what surprised me was the next question – are you going to be terminal in the next six months? How am I supposed to know?”

The other men are shocked, but all recall different insurance policies asking impossible but similar questions. The men pass around their advice on the best places to get travel insurance for another ten minutes.

One says: “See, this is what the group is for, talking about things like this and getting advice.”

Then, a newcomer to the group, pipes up comes: “Already, I really feel supported by this group. At the moment I’m quite scared.”

He goes on to talk about his diagnosis and the treatment he is receiving, telling them about how it’s causing him a lot of worry. The men listen and occasionally chime in to provide advice and support.

One states: “When you worry, that’s when your body runs riot.”

Another adds: “Get up, get on with it. Do what you want. It’s best not to worry in the meantime.”

The rest of the meeting goes on like this for half an hour – with members exchanging their knowledge and advice. Some men discuss different symptoms they’ve been experiencing or treatments they’re undergoing – some can relate, some cannot but they listen anyways.

The men conclude the meeting agreeing that every body is different and all cancer treatments and symptoms can be different. But by coming together these men can be men – men who can openly talk about their worries, share some laughs and a slice of cake, and then carry on with their day knowing that they are not alone.

The Kingsman Group actively welcomes new members at any stage in their cancer journey. The group holds monthly meetings on the first Wednesday morning of every month at The Big C Support and Information Centre in Kings Lynn. They also hold a second meeting at midday on the third Wednesday of each month at The Chequers, Wimbotsham, Downham Market.