Guest Blog: 500 packets of biscuits every month for Big C…

Guest Blog: Jill Watkinson or ‘Biscuit Jill’, as she’s known, shares the impact of her appeal on behalf of Big C.

We’re delighted that Norfolk Superstar and Big C Champion Jill joins us as guest blogger this month to tell the story of her phenomenally successful Big C Biscuit Appeal. 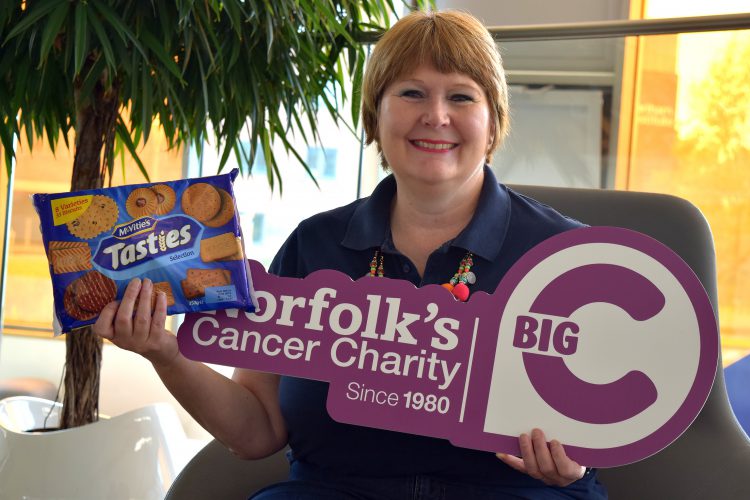 Jill Watkinson or 'Biscuit Jill' has run a successful biscuit collection appeal for Big C for seven years.
A cuppa and a biscuit means so much more to those affected by cancer.

Seven years ago, when I visited the Big C Centre at the Norfolk and Norwich University Hospital (NNUH) with a networking group, I heard about the many cups of tea and biscuits that are provided to visitors as part of the emotional and practical support offered to those in our Norfolk community affected by cancer.

I felt strongly that the charity should not have to fund the refreshments in the Big C centre and following my visit decided to help. I set up an account as ‘@biscuitjill’ on Twitter and asked for donations of biscuits. Although the social media channel was still in its relative infancy, I received a good response and so began the Big C Biscuit Appeal.

What started as a carrier bag full of biscuits delivered to the Big C NNUH centre every two weeks, quickly grew. I now collect 500 packets of biscuits each month for the Big C centres as well as tea, coffee and other kitchen supplies. When Big C’s kitchen cupboards are full, I also store biscuits until they are needed. When available, the biscuits are also distributed to the Big C centres in Great Yarmouth and Kings Lynn. It is estimated that over seven years of the appeal that we have collected and supplied almost 30,000 packets of biscuits for Big C!

I think the success of the appeal lies in its simplicity. It’s something people feel able to do to help, a packet of biscuits is a tangible donation. But it is so much more than a packet of biscuits, it encompasses the care and support offered by Big C and the power of the Norfolk community working together on behalf of others.

When it first began, I would meet people in car-parks and all sorts of places to collect their biscuits! I have always been a keen networker and so I would always mention the biscuit appeal in conversation. This led to a diverse range of Norfolk businesses coming on board. Organisations such as the Theatre Royal and Norfolk Police have boxes in their offices for biscuit donations. I am also co-organiser of the ‘Norfolk Tweetup’ group which holds events for 60 or 70 people per month with the entry fee as a packet of biscuits. Convenience stores around the corner from our event locations have been known to have a queue of 20 before it begins! This all helps to spread the word about Big C too of course, when they explain why they are all there. I even had someone tap me on the shoulder at the airport once, asking if I was Biscuit Jill and handing me a packet of custard creams!

I am always on the look-out for new businesses or groups of friends to help with the appeal. If you would like to provide biscuits or other kitchen supplies for Big C, please do get in touch with me at jill@norfolktweetup.co.uk or on Twitter @biscuitjill.

To learn more about the work Big C does to improve the lives of those affected by cancer in Norfolk and Waveney, please visit www.big-c.co.uk