We’re delighted to welcome our very own Intern – Anne-Sophie – to the blog this week as she prepares to leave Big C after 9 months with the Big C team, to take up a new role with Cancer Research UK in London. Here she tells us more about her time at Big C, what she’s learnt and what she will take away with her. Over to you Anne-Sophie… 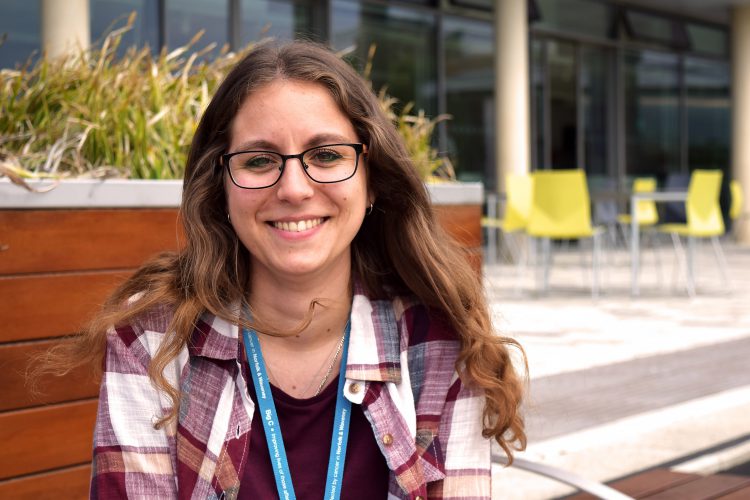 Anne-Sophie Kleczewski, Charity Strategy Development Intern at Big C
Over the nine months I spent at Big C, I have had many opportunities to visit our Big C Support & Information Centres and will never forget all the kind people I have met.

Like so many people, several of my relatives have been affected by cancer. Some have died, and some have survived. Sometimes, we say that it runs in our family but isn’t every family affected by cancer in some way?

At home, since I was little, I often felt like the disease was looming over us – the word “cancer” whispered or unsaid, the names of those who had died uttered as though they could bring bad luck. The day my mother burst into tears after a phone call from her cousin – the first and only time I saw her cry – is the day I truly understood what cancer was and meant. Perhaps in an attempt to protect me a few years later (but more likely because it is so taboo and painful), no-one had thought necessary to tell me when an aunt I adored and was close to was receiving palliative care and dying at home. She had had cancer several times throughout her life and it had come back – for the last time. I often re-read the last email we ever exchanged – a message in which she finally tells me her story and encourages me to ask about mammograms and screenings as soon as possible.

Fast forward a couple of years. In 2017, I was a final year English Literature student at the University of East Anglia, exploring career options and trying to find myself. I was already involved with charities and had discovered a passion for working with vulnerable people as a volunteer at Norwich Mind and the local Wellbeing Service. When I found out that a Norfolk cancer charity called Big C were seeking an intern to help develop an Education project. I recognised myself in the job description and, with my family history in mind, I seized this opportunity.

On my very first day at Big C, I went to our Support & Information Centre at Great Yarmouth and was immediately immersed in the world of a cancer charity that supports so many people every year. I was new and nervous and feared that meeting people affected by cancer would be daunting, medical, sterile. How wrong I was! Everybody – staff, centre visitors and volunteers alike – were friendly and welcoming. They just seemed a group of friends, having a good time, chatting over tea and biscuits in a relaxed atmosphere. Over the nine months I spent at Big C, I have had many opportunities to visit Support & Information Centres and will never forget all the kind people I have met. Many opened up, telling me about themselves or sharing moving stories about their cancers and the impact it had on their lives. Over time, I saw how crucial Big C’s support is for so many people and saw the amazing work my colleagues do.

As part of my work, I enjoyed meeting lots of people but also amassed a wealth of knowledge about cancer, prevention, research, early signs and symptoms, treatments, survivorship, end of life. I helped to develop Big C’s Education Strategy which aims to educate the general public about cancer and related careers. I know that this work will have a positive and lasting impact on the future of health and care in the region. I also had the chance to get involved on another project focusing on palliative and end of life care education for a range of health care professionals. Again, this really opened my eyes on what is needed and what can be done to improve care and support and the difference that it can make for families, friends, carers. On several occasions, I was able to represent Big C in the community at various health and wellbeing events or careers fairs – sharing my passion for the work I do and raising awareness of Big C and our services. I cannot express how rewarding it was to feel like you had helped people – even if it meant listening to just one person. At the end of my time at Big C, I worked on a Research Grants Impact Report and realised how much the charity is committed to supporting people through research which, in turns, participates in developing innovative and better ways of diagnosing cancer early or more effective and less invasive treatments.

After all this, I sometimes came back home in the evenings desperate to clear my mind and forget all about the word “cancer” but also always incredibly proud and honoured to be part of a charity providing such good care and support for people affected by cancer and that is committed to reaching under-served groups. As my internship comes to an end, I am so grateful to have been offered such an amazing opportunity and indebted to Big C for everything I have done, everything I learnt and everyone I met.

Anne-Sophie Kleczewski moved to Norfolk in 2014 and took a degree in English Literature at the University of East Anglia. During her studies, she was a prolific student blogger and became a volunteer translator at Banana Link and a volunteer at Norwich Mind and the Wellbeing Service. She spent nine months as a Charity Strategy Development Intern at Big C before embarking for a new journey at Cancer Research UK.