Ryan Claxton is a remarkably strong young man, who recently turned 12 years old. He has had cancer three times since he was just four years of age and his recent relapse with Acute Myeloid Leukaemia (AML) was in January of this year. The Big C Centre provided some support when the family were struggling financially. This is Ryan and Adam’s story… 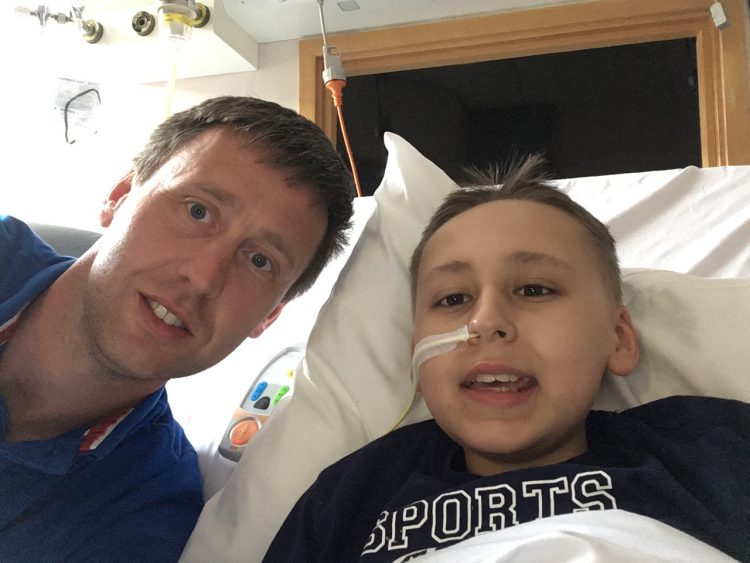 He wouldn’t have survived the weekend

When Ryan was just four years old he was a very energetic boy, a very practical character who was always keen to be outside, playing with sand, mud, and like his father, good with his hands, knocking nails in wood and making things.

However, one day, things suddenly changed. He went from being a typical little boy, always interested in being outdoors, to having no energy and being indoors lying on the sofa all the time. He had lost his spark and his colour, and his complexion went a worrying shade of green.

Ryan’s parents took him to the GP a few times but every time the doctor said it was just a virus. The family persisted and it was on their fourth visit that the doctor suggested a blood test. They were phoned that same afternoon with the results and told that they should pack a bag because an ambulance was on its way. At this stage the family didn’t know what the cause was, only that Ryan’s illness was being treated as an emergency.

Once at hospital, they were told that Ryan had Leukemia and that his blood levels were dangerously low. He wouldn’t have survived the weekend and so it was very fortunate that he was rushed into hospital that day. Subsequently, Ryan stayed at Addenbrookes for the next six months where he was treated with intense chemotherapy.

After making a recovery in 2011, Ryan has since had AML twice again and has been through numerous rounds of chemotherapy and a stem cell transplant. Most recently, he’s just received his second stem cell transplant in Bristol but is suffering badly with side effects (GVHD).

Adam, Ryan’s father, said: “It’s not been easy. Every time Ryan has relapsed, things become harder. His body has been through so much. His organs are weaker after all the treatments and chemotherapy, so this time has been harder on his body, but regardless, he’s still doing well. He’s a really jolly and happy chap, a real inspiration to me. It’s fantastic, he’s so strong. Of course, as his Dad, all I want to do is keep one arm around his all the time, keep him under my umbrella, under my wing.”

Adam also praised the support the family received from Big C: “Big C were really kind and helpful when we were struggling financially. I had to give up our car mechanic business to care for Ryan in Addenbrookes full time while my wife stayed at home to care for our other young children. It was during one of our hospital visits. We called into Big C to see if they could help. A lovely lady took us through some information and we had a chat with Ryan and myself.”

Adam told us that he really appreciates the work that Big C does for people on a local level. Ryan’s Step Mum, Melanie, recently took part in Big C’s Colour 5k and Adam hopes to take part alongside Melanie in next year’s event.

“Thankfully, Ryan’s out of hospital again now. He’s slowly coming out of the red. Back then, we were so grateful to have some support for 15 minutes, to have a normal chat and someone who wasn’t a doctor or nurse make a fuss of Ryan and ask about his situation and wellbeing, It was a relaxing space and so chilled out, really nice. We definitely would have used the Centre even more but we’ve been mainly based at Addenbrookes and Bristol for treatment.”