For Volunteers’ Week, we spoke with three Big C volunteers – Steve, Jennifer and Janette – about their experience of volunteering; how they get started, what they enjoy about it and how it’s made a difference in their lives. 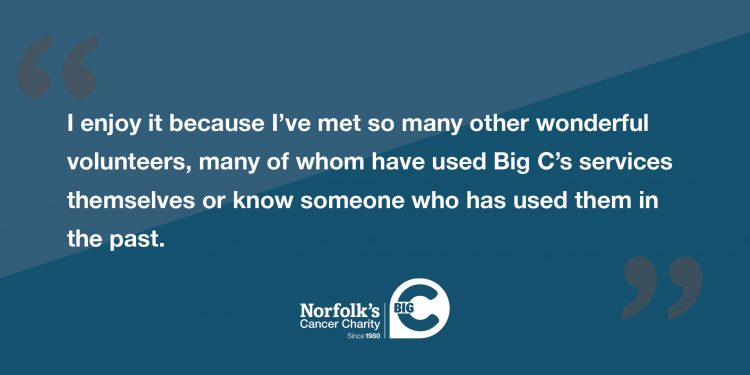 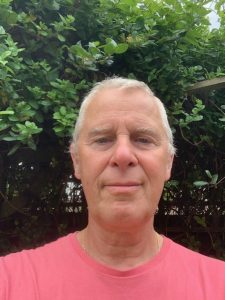 Steve Mingay has been a volunteer for the Big C Centre in King’s Lynn for over a year now; helping to greet Centre visitors, offer them refreshments, and listen to their concerns.

He said: “I found myself spending more and more time at the Centre because of the Kingsman group which led me to want to volunteer. After working in the police force for over thirty years, I’ve come to enjoy talking to people and I like using this skill while volunteering to help others during a difficult time.”

Beside volunteering at the Centre, Steve has also attended events to speak about his experience and help promote the Kingsman Group.

On recalling his most memorable moment as a volunteer, Steve said: “I remember once I spoke with a woman about her concerns over her breast cancer diagnosis. I was humbled that she was willing to share her concerns and questions about her treatment plans with me – someone who was a complete stranger. I think talking about this helped her and it was a real defining moment for me.”

When Steve isn’t volunteering, he enjoys riding his motorcycle and traveling. He hopes that after lockdown restrictions ease, he can go for a tour through Wales and Scotland on his bike. 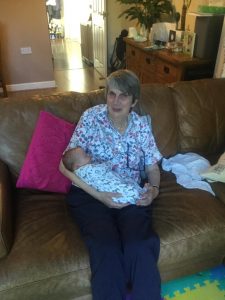 When Jennifer Bottomley and her husband moved to Norfolk eleven years ago for retirement, Jennifer decided she wanted to start volunteering so she could meet new people and help a local charity.

One day, she happened to pass by the newly opened Big C shop in Cromer and noticed a sign in the window stating the shop was looking for volunteers.

She said: “I knew when I retired I wanted to volunteer and was quite happy to do so for a cancer charity. I walked into the shop after seeing the sign, and was greeted by the wonderful Wendy, the shop’s manager, who showed me around the store and explained how volunteering worked.

“Since I had worked as a librarian, I was comfortable working on a till, organising shelves and talking to customers. I now volunteer every Thursday morning and a couple of hours on Saturday mornings.”

Jennifer has now been a volunteer for Big C for over ten years. Alongside volunteering for us, she also volunteers at the RNLI shop, Sheringham museum, the Fisherman’s museum and for the Royal Voluntary Service.

“Since I’ve been volunteering in the shop for so many years, we’ve had people return to our shop every summer and you get to know more about them and become a friendly face when they’re in town.”

Jennifer’s advice to anyone who wants to volunteer would be: “I would urge others to give it a go. I’ve enjoyed it for eleven years and have made some good friends. You can also gain a bit of expertise if you work in one area for a long time. Overall, it’s given me a new dimension to my life.”

After quarantine has ended and it is safe to do so, Jennifer is looking forward to seeing her family again, especially her three-year-old grandson who she says is ‘changing and growing every day’.

Janette Ely has been volunteering at Big C since 2017; first as an events volunteer and now she also volunteers in our Big C shop on Timber Hill, too.

Janette began volunteering at Big C events as she wanted a volunteer role which would give her flexible hours as she was still working full time. For her, volunteering was a way to say thanks to Big C for supporting her during her cancer treatment.

She said: “In 2007, I was diagnosed with Myeloma, a cancer that forms in the white blood cells. However, due to the nature of the cancer, I did not start treatment until 2015 when doctors told me the cancer had become ‘active,’ or symptomatic.

Since 2017, Janette has volunteered at several events in Norfolk including the Run Norwich event, British Cycling event, Big C Golf Days and more.

Regarding why she likes to volunteer, Janette said: “I enjoy it because I’ve met so many other wonderful volunteers, many of whom have used Big C services themselves or know someone who has used them in the past.

“When my friend retired from her role, she started to volunteer at the Big C shop in Timber Hill. She did this because she wanted to give back to Big C, as she was often the one who picked me up from my treatments and saw how the importance of the support I received.

“Since I’ve also retired, I now volunteer in the shop too. I’ve met so many people through volunteering there. It’s a wonderful experience getting to work with someone whose company you really enjoy.”

The advice Janette would give to anyone who wants to volunteer is ‘be open to get out of your comfort zone.’

Currently, Janette has been told to shield and self-isolate by the government. During this period, she has been spending time working in her greenhouse, growing tomatoes, cucumbers, aubergines and more. Since she retired, Janette has taken up baking and making chocolate, and giving these as treats to her family and friends.

If you’re interested in becoming a Big C volunteer, please fill out our Volunteer Request Form at: https://signup.big-c.co.uk